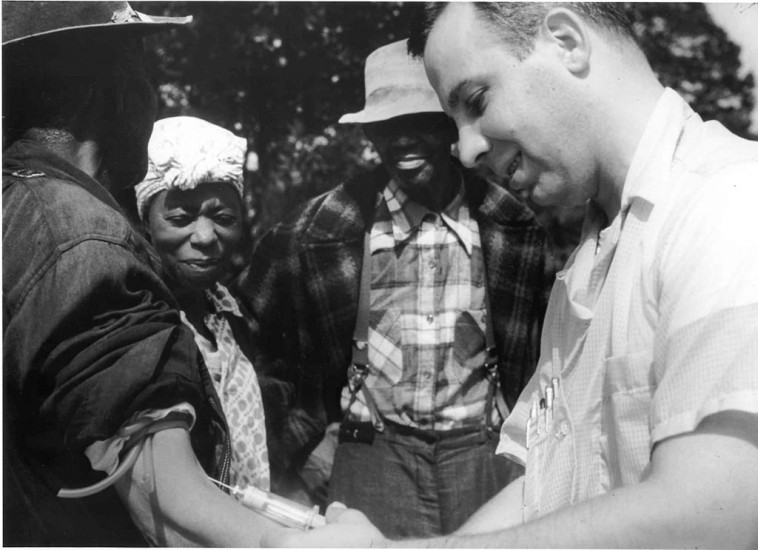 The Tuskegee Syphilis Experiment (/tʌsˈkiːɡiː/)[1] was an infamous clinical study conducted between 1932 and 1972 by the U.S. Public Health Service studying the natural progression of untreated syphilis in rural African-American men in Alabama under the auspices of receiving free health care from the United States government.[1]

The Public Health Service started working on this study in 1932 during the Great Depression, in collaboration with Tuskegee University, a historically black college in Alabama. Investigators enrolled in the study a total of 600 impoverished, African American sharecroppers from Macon County, Alabama. Of these men, 399 had previously contracted syphilis before the study began, and 201[2] did not have the disease. The men were given free medical care, meals, and free burial insurance for participating in the study. After funding for treatment was lost, the study was continued without informing the men they would never be treated. None of the men infected were ever told they had the disease, and none were treated with penicillin even after the antibiotic became proven for the treatment of syphilis. According to the Centers for Disease Control, the men were told they were being treated for “bad blood”, a local term for various illnesses that include syphilis, anemia, and fatigue.

The 40-year study was controversial for reasons related to ethical standards because researchers knowingly failed to treat patients appropriately after the 1940s validation of penicillin as an effective cure for the disease they were studying. Revelation in 1972 of study failures by a whistleblower led to major changes in U.S. law and regulation on the protection of participants in clinical studies. Now studies require informed consent,[3] communication of diagnosis, and accurate reporting of test results.[4]

By 1947, penicillin had become the standard treatment for syphilis. Choices available to the doctors involved in the study might have included treating all syphilitic subjects and closing the study, or splitting off a control group for testing with penicillin. Instead, the Tuskegee scientists continued the study without treating any participants; they withheld penicillin and information about it from the patients. In addition, scientists prevented participants from accessing syphilis treatment programs available to other residents in the area.[5] The study continued, under numerous US Public Health Service supervisors, until 1972, when a leak to the press resulted in its termination on November 16 of that year.[6] The victims of the study, all African American, included numerous men who died of syphilis, 40 wives who contracted the disease, and 19 children born with congenital syphilis.[7]

The Tuskegee Syphilis Study, cited as “arguably the most infamous biomedical research study in U.S. history”,[8] led to the 1979 Belmont Report and the establishment of the Office for Human Research Protections (OHRP).[9] It also led to federal laws and regulations requiring Institutional Review Boards for the protection of human subjects in studies involving them. The Office for Human Research Protections (OHRP) manages this responsibility within the US Department of Health and Human Services (HHS).[10]

The intent of the study was to record the natural history of syphilis in Blacks. The study was called the “Tuskegee Study of Untreated Syphilis in the Negro Male.” When the study was initiated there were no proven treatments for the disease. Researchers told the men participating in the study that they were to be treated for “bad blood.” This term was used locally by people to describe a host of diagnosable ailments including but not limited to anemia, fatigue, and syphilis.

Who Were the Participants

A total of 600 men were enrolled in the study. Of this group 399, who had syphilis were a part of the experimental group and 201 were control subjects. Most of the men were poor and illiterate sharecroppers from the county.

What the Men Received in Exchange for Participation

The men were offered what most Negroes could only dream of in terms of medical care and survivors insurance. They were enticed and enrolled in the study with incentives including: medical exams, rides to and from the clinics, meals on examination days, free treatment for minor ailments and guarantees that provisions would be made after their deaths in terms of burial stipends paid to their survivors.

There were no proven treatments for syphilis when the study began. When penicillin became the standard treatment for the disease in 1947 the medicine was withheld as a part of the treatment for both the experimental group and control group.

On July 25, 1972 Jean Heller of the Associated Press broke the story that appeared simultaneously both in New York and Washington, that there had been a 40-year nontherapeutic experiment called “a study” on the effects of untreated syphilis on Black men in the rural south.

Between the start of the study in 1932 and 1947, the date when penicillin was determined as a cure for the disease, dozens of men had died and their wives, children and untold number of others had been infected. This set into motion international public outcry and a series of actions initiated by U.S. federal agencies. The Assistant Secretary for Health and Scientific Affairs appointed an Ad Hoc Advisory Panel, comprised of nine members from the fields of health administration, medicine, law, religion, education, etc. to review the study.

While the panel concluded that the men participated in the study freely, agreeing to the examinations and treatments, there was evidence that scientific research protocol routinely applied to human subjects was either ignored or deeply flawed to ensure the safety and well-being of the men involved. Specifically, the men were never told about or offered the research procedure called informed consent. Researchers had not informed the men of the actual name of the study, i.e. “Tuskegee Study of Untreated Syphilis in the Negro Male,” its purpose, and potential consequences of the treatment or non-treatment that they would receive during the study. The men never knew of the debilitating and life threatening consequences of the treatments they were to receive, the impact on their wives, girlfriends, and children they may have conceived once involved in the research. The panel also concluded that there were no choices given to the participants to quit the study when penicillin became available as a treatment and cure for syphilis.

Reviewing the results of the research the panel concluded that the study was “ethically unjustified.” The panel articulated all of the above findings in October of 1972 and then one month later the Assistant Secretary for Health and Scientific Affairs officially declared the end of the Tuskegee Study.

In the summer of 1973, Attorney Fred Gray filed a class-action suit on behalf of the men in the study, their wives, children and families. It ended a settlement giving more than $9 million to the study participants.

The Role of the US Public Health Service

In the beginning of the 20th Century, the U.S. Public Health Service (PHS) was entrusted with the responsibility to monitor, identify trends in the heath of the citizenry, and develop interventions to treat disease, ailments and negative trends adversely impacting the health and wellness of Americans. It was organized into sections and divisions including one devoted to venereal diseases. All sections of the PHS conducted scientific research involving human beings. The research standards were for their times adequate, by comparison to today’s standards dramatically different and influenced by the professional and personal biases of the people leading the PHS. Scientists believed that few people outside of the scientific community could comprehend the complexities of research from the nature of the scientific experiments to the consent involved in becoming a research subject. These sentiments were particularly true about the poor and uneducated Black community.

The PHS began working with Tuskegee Institute in 1932 to study hundreds of black men with syphilis from Macon County, Alabama.

As part of the class-action suit settlement, the U.S. government promised to provide a range of free services to the survivors of the study, their wives, widows, and children. All living participants became immediately entitled to free medical and burial services. These services were provided by the Tuskegee Health Benefit Program, which was and continues to be administered by the Centers for Disease Control and Prevention in their National Center for HIV, STD and TB Prevention.

In February of 1994 at the Claude Moore Health Sciences Library in Charlottesville, VA, a symposium was held entitled “Doing Bad in the Name of Good?: The Tuskegee Syphilis Study and Its Legacy.” Resulting from this gathering was the creation of the Tuskegee Syphilis Study Legacy Committee which met for the first time in January 18th & 19th of 1996.  The committee had two goals; (1) to persuade President Clinton to apologize on behalf of the government for the atrocities of the study and (2) to develop a strategy to address the damages of the study to the psyche of African-Americans and others about the ethical behavior of government-led research; rebuilding the reputation of Tuskegee through public education about the study, developing a clearinghouse on the ethics of scientific research and scholarship and assembling training programs for health care providers. After intensive discussions, the Committee’s final report in May of 1996 urged President Clinton to apologize for the emotional, medical, research and psychological damage of the study. On May 16th at a White House ceremony attended by the men, members of the Legacy Committee and others representing the medical and research communities, the apology was delivered to the surviving participants of the study and families of the deceased. 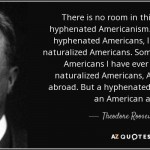 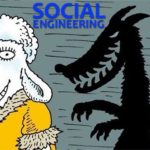 After my words they spake not again; and my speech dropped upon them. (JOB:29:22 )